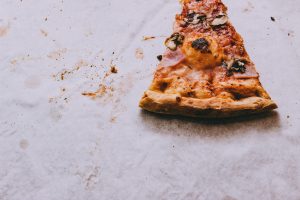 Enjoy a Meal at a Local Pizzeria

The word "pizza" was first documented in 997 AD in the Italian city of Gaeta.

Pizza was originally a dish for the poor, but that changed in 1889 after Italian Queen Margherita noticed peasants munching on a large piece of bread while traveling throughout the country.

She decided to try it, and when her subjects learned that pizza had become her favorite food, it became an acceptable dish among all classes.

If you would like to enjoy a few slices for dinner tonight, head to one of following pizzerias:

Flour House is owned by a husband and wife team who wanted to create a modern eatery that offered authentic Napoletana pizza in a casual atmosphere.

The pizzas are made using fresh, simple ingredients, and baked in an imported Stefano Ferrara wood-burning oven. It's the only such oven between Los Angeles and San Francisco, which makes the restaurant stand out.

It was in 1977 when Chuck Woodstock opened the first Woodstock's Pizza in Oregon.

From the start, he used a fresh, hand-tossed dough that he topped with his grandmother's marinara sauce. Chuck soon had a loyal following, and he opened a second location in San Luis Obispo.

Today it's ranked the third best independent pizzeria in the nation by Pizza Today, and its mission is to prepare every meal with individual attention.

The servers provide friendly, attentive service, and the menu includes pizzas such as Barbecue Bird, The Bomb, and Kickin' Carnitas.

These are just two of the pizzerias near The Academy Chorro. If you are looking for a place to call home, please contact us to schedule a tour. In addition to these restaurants, we are also near fun attractions and top shopping destinations.